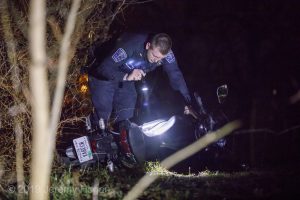 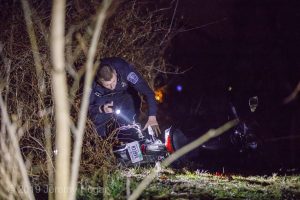 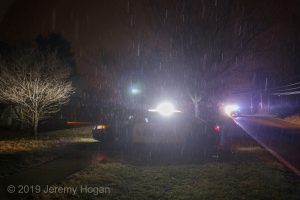 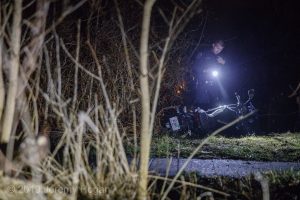 A police officer investigates after a pursuit which led police through the streets of Bloomington, and offroad where a motorcycle was ditched near the S. Walnut Grove Apartments on Walnut Street Pike, Sunday, March 24, 2019 in Bloomington, Ind. (Photo by Jeremy Hogan/The Bloomingtonian)

Update. From Bloomington Police Department Captain Ryan Pedigo, “The officer attempted to stop the motorcycle for failing to stop at the red traffic light at Walnut St/Winslow Rd. The motorcycle initially pulled into the parking lot of Lucky’s, but then fled heading southbound through the parking lot, and eventually out onto Walnut Street, where it continued southbound. The officer did note in his PC affidavit that the motorcycle was traveling approximately 75 MPH while going southbound on Walnut Street. The motorcyclist, identified as David J. Bean, 47, of Bloomington, continued to flee from officers for several blocks and eventually drove the motorcycle up onto the sidewalk in the 3100 block of South Walnut Street Pike. He then ran from the motorcycle and was apprehended by officers in the courtyard of the apartment buildings. Bean was remanded to custody of the Monroe County Jail for the charges of Operating a Vehicle as a Habitual Traffic Violator, level 5 felony, Resisting Law Enforcement with a Vehicle, level 6 felony, Operating a Motor Vehicle Without Financial Responsibility, class C misdemeanor, and Reckless Driving, class C misdemeanor. Bean also had four outstanding arrest warrants.”